How big should your brewhouse be

Setting up your own brewery can be a very demanding venture and a big investment, so it is important to set some goals and to have a very clear idea of what you want before you purchase your equipment.

What kind of brewery do you want?

Do you want to start your own craft brewery and take your hobby to the next level, making it profitable? Will the brewery only be used for beer production or do you plan on also having your own tap room?
Do you already have a food service establishment and would like to add your own beer to your existing offer?

Before purchasing the equipment, contact some experienced brewers or other experts who will help you design your brewery according to your goals, needs and production capacity. Bear in mind that there is a possibility you will have to expand your business in the future, so plan accordingly.

A brewery's capacity is determined by:

Choose a brewhouse that is suitable for your work method and your chosen location (surface area and height) and that will enable you to produce the amount of wort you had planned.

What determines the capacity of a brewery?

1) The amount of wort made with one batch

Find out how much wort can be produced with one batch. With each system, it takes approximately 7 to 8 hours to complete a single batch. The design of the brewhouse does not play a significant role in this case, as this is the time it takes to carry out all the processes that occur inside the brewhouse: heating the water, mashing, lautering, adding hops and transferring the wort into the fermentation tank.

Beer needs its time and space to properly and successfully mature.

Still, the amount of wort made with one batch does not completely determine the capacity of a brewery. Why?

- You can finish more than one batch per day.
- Some brewhouse designs enable simultaneous process execution in separate tanks, so it is possible to start mashing a new quantity of malt even before the wort has been transferred from the kettle into the fermentation tank (knock-out). Consequently, the total time needed to complete two batches is substantially reduced. So make sure you find out how many batches per day can be made with a brewhouse, if you carry out multiple brewing processes at the same time.

3) Number of fermentation and maturation tanks at disposal

There is a big difference between the capacity of a brewhouse and that of a brewery. A large brewhouse capacity is no use if you do not have a suitable amount of storage units, which is what ultimately determines the brewery's capacity. You can only make as much wort as you are able to transfer into fermentation and maturation tanks.

Beer needs approximately 3 to 4 weeks to mature, depending on the type.

To simplify, we could say that the nominal volume of a brewhouse (batch) equals its monthly capacity.

This would be the case if you only had at your disposal a brewhouse and a single fermentation tank whose volume equaled a single batch, as you have to take into account the fact that beer takes approximately 3 to 4 weeks to mature in the fermenter and you would be able to start a new batch only after emptying it. In this case, you'd be able to brew once per month.

With this configuration, the equipment efficiency is low and the brewhouse is mainly a big expense. If you want to make smaller quantities of beer, you should buy a smaller brewhouse. If, on the other hand, you'd like to make more beer, you will need additional fermentation and maturation tanks, thus a bigger brewery capacity. 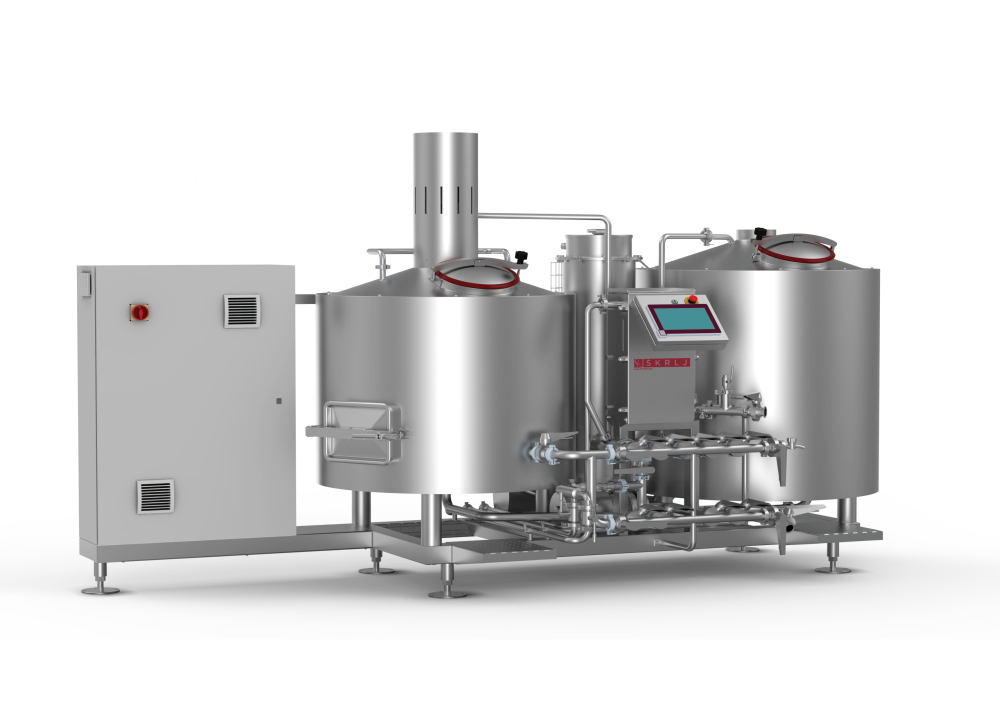 Below you will see two examples of a brewery configuration in combination with the BHM 500 brewhouse.

For this amount of wort, taking into account that the weekly amount of wort produced will remain in the fermenter for approx. 3 weeks, you will need three 1000-L fermenters and one 1000-L maturation tank, as well as water preparation and water storage tanks.

For this amount of wort, taking into account that the weekly amount of wort produced will remain in the fermenter for approx. 3 weeks, you will need six 1000-L fermenters and two 1000-L maturation tanks, as well as water preparation and water storage tanks.