Compact brewhouse BHM 500 is part of our small brewhouse series.
The BHM 500 is an ingenious, well-thought-out, and versatile product. It can be used for either single-step or multi-step mashing at different temperatures, but, with only a few valve switches, you can also transform it into a decoction mashing brewhouse.

The tanks and separate electrical cabinet are mounted on the supporting frame. The BHM 500 has a standard design, all piping and wiring is already connected, and it also has a built-in touch screen control panel. 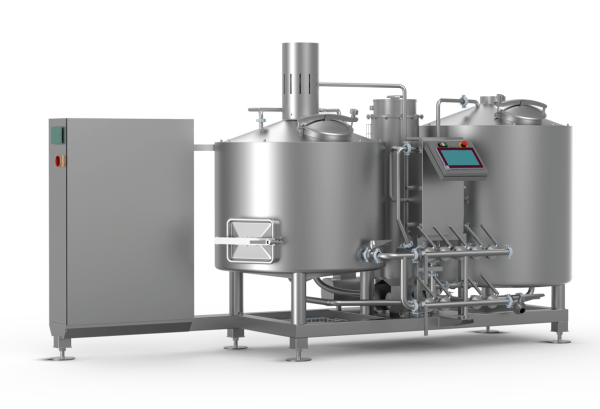 We also design hot and cold water tanks (1200 L/2000 L), whose volume and design is compatible to combine with the BHM 500. The water tanks are connected with the brewhouse control unit, so the temperature and valve operation can be controlled easily using the central control panel.

A built-in user interface allows for good control and supervision during every step of the process: pump and agitator control, temperature regulation (separate jacket and tank bottom settings), setting timers. There is also a set of alarms that are there for safety reasons and inform the user of any system irregularities or other problems in the process of beer brewing.
All actual and set values regarding the tanks and their built-in devices are accessible on the touch screen control panel.

Both tanks are insulated and equipped with heating surfaces in the jacket and bottom (pillow plates). The standard design tanks use thermal oil as the heating medium, but they can be customized to operate on steam heating. All set and actual temperature data for each device is displayed on the screen.

USAD'BA MYSKHAKO is a young agritourism complex located south of Novorossiysk, at the foot of Myskhako Mountain in the village of Fedotovka. Their vineyards cover an area of 80 hectares and are home to several grape varieties: Pinot Noir, Merlot, Cabernet Sauvignon, Shiraz, Pinot Gris, Chardonnay, Cabernet Franc, Petit Verdot, Riesling, and Pinot Blanc. In 2019, Usad'ba Myskhako opened their new gravity-flow winery, which is equipped with more than seventy wine tanks and fermenters, manufactured by SK Škrlj.

Fill out the form below

We approach every project individually, with every customer's wish and need in mind. A group of experts from various fields work together to find the best solution for our investor. How can we help you? Fill out our form or call us and tell us about your plans. Together, we'll find the right answer.